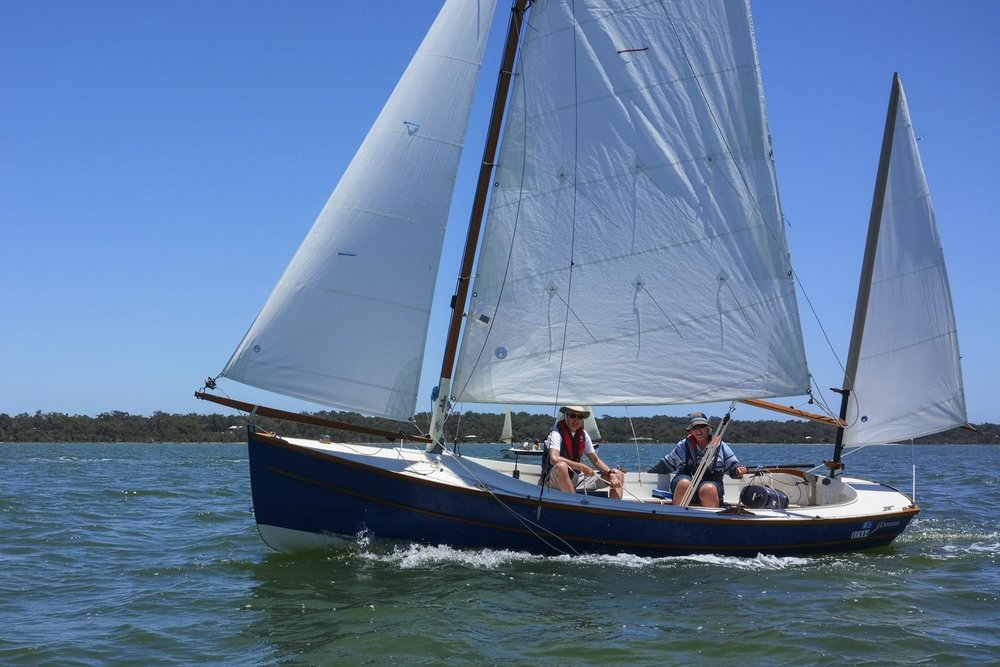 Following on from last year’s very successful rally it was decided that we would run the same format and hold the two day rally with the fleet based at Port Bouvard Sailing Club. The format permits OGA members to take part on either the Saturday or the Sunday, or both days and camp at PBYC taking advantage of the facilities at the sailing club (ie a warm shower, good toilets and a gas BBQ). This also means that heavier more sophisticated and comfortable camping gear can be used as it doesn’t have to be carried by the boats.

The program called for a 10am departure from the beach, however this was not possible due to a very busy boat ramp, so it wasn’t until almost 11am that the last boat left the beach and set sail.

At the briefing, everyone was reminded that this was a social sail and not a race, and that we should look out for each other’s safety. It was agreed that with the wind already blowing reasonably hard from the south that we would sail south and find a beach for lunch. Paul Day from the schooner Waltzing Matilda suggested that we sail to the beach near his 5 acre block on the east coast of the Harvey Inlet. He assured us that there was a sand bar that created a small sheltered lagoon, albeit shallow making it easy to land even in a strong south-westerly wind.

The low tide had created a large area of very shallow water immediately to the south of the PBYC, however once this had been negotiated, the fleet set off sailing south into the breeze. It was good to see the faster boats looping back to let the smaller guys catch up. The sail south was interrupted by the news on the radio that Arapoa had capsized near the eastern shore line, fortunately Fala was close at hand and after several minutes the two Michaels had righted and bailed the boat out and were sailing again, albeit with a reef in the sail. Fortunately there were no further mishaps with the fleet and unlike the previous year no-one fell overboard from their boat!

Around 500m south of the science platform the ‘Schooner boys’ led the fleet into their hidden lagoon, the low tide meant that most of us were crushing crabs as we approached the shore line. The sand bar and the lagoon presented an iconic scene with a fleet of Pelicans swimming in a close formation synchronising their fishing efforts with coordinated lunges into a shoal of trapped fish, on the sand bar itself there were several Oyster Catchers and a group of crested terns loafing around. Cornish Maid had to stand off and anchor in deeper water, however Andrew in Fala kindly brought Ryan and Misty ashore.

An old wheelbarrow was the marker for the path to Paul’s house through the seeming impenetrable Tea Trees, and after a safety briefing about tiger snakes we followed Paul down a sandy track to his plot of land and to his shed. From the outside the shed looked like any other large grey metal structure, but inside there was a different world. Exquisite drift wood furnishings were just the start, in one corner sat a fully equipped work bench with hand augers, bits, (some looked like they had fallen off an oil drilling ship), saws, hammers, clamps, wood shaves and other serious carpentry tools for working large and small pieces of wood. Elsewhere was a kitchen, a sleeping area, super soft looking sofas and various bikes and water toys. Chairs were found and we sat down under one of the large trees listening to Paul’s plans for the block. It was quite obvious to everyone listening that Paul and his friends are super special people with a classic ‘can do’ approach to life and any problems it might throw in the way. Waltzing Matilda’s crew are also involved with land yachting due to their long time links with the Gold Fields, a fascinating photo album was passed around the group containing pictures of land yachts. In amongst the pages were photographs of past and present land speed record holding land yachts.

All too soon it was time to take our leave of Paul’s company, and we set off back to the beach. We sincerely hope Pauls plans come good despite the complexities of complying with the numerous bush fire regulations. We threatened to re-visit him in next year to see how his house is progressing.

After a quick group photograph on the sand bar it was time to enjoy the fast reach north back to PBYC. The sea breeze was blowing around 15-18 knots, I think it is fair to say that we all had great fun in the sailing conditions.

Back at PBYC, everyone was busy making sure that the boats were secure for the night, setting up tents and preparing for dinner. A warm shower and a cold beer was the perfect finish to the day and start to the evening. Despite the wind we sat in front of the club house enjoying the evening and watching each other use various cooking and camping gadgets. Fala’s LED camping spotlight (complete with USB charging points) was a great help to everyone, especially to watch Cornish Maids set of collapsible silicon cooking pots in action!

The secret weapon for camping at PBYC is a decent set of ear plugs to block out the noise of the wind and rattling rigging. However no set of ear plugs were a match for the noise made by the fishermen who appeared very early on Sunday morning waking some of us with some choice (new to some) words that may or may not have had much to do with fishing or the state of the tide!

Those with coffee making facilities were the lucky ones, however no one could match the previous year’s very amusing coffee making demonstration by John Longley. After packing up our camping gear, it was time to get back onto the water.

Whimbrel and How Bazaar joined us for the Sunday sail and were already waiting for us on the water. The Schooner boys had said that they would be with us by 9am, however the wind which had been quite strong through the night was now rapidly dropping out, and it looked like they may be delayed. Despite this the wind was again forecast to be strong from the south making the planned sail to Mandurah Quays problematical, so after a short discussion it was agreed to sail south back down the Harvey Inlet before turning back around 12.30pm and calling in at the beach just to the south of the Port Bouvard boat ramps for lunch.

After a very slow start in light conditions the wind settled down and came it at a pleasant 10-12 knots from the south west. The Schooner boys finally made it and joined us for a while before peeling away near the Bouvard boat ramps to buy a coffee. There were no mishaps this time as we sailed south, and some boats had close interactions with a pod of dolphins. Most of the fleet managed to round the Science Platform in the strengthening sea breeze, before we turned north. The fast sail was led by Wee Birlinn with Jim obviously enjoying the broad reach. The beach was again characterised by a long shallow foreshore making it tricky for several boats to get close. However after a short wade through the mud, and running the gauntlet of the Blue Manna crabs, everyone gathered on the beach for a picnic lunch. The proximity of the Port Bouvard store was a welcome opportunity to buy a burger or a reviving coffee.

With PBYC only a mile away, it was a short downwind sail back to base, however as has occurred on previous weekends from this spot, the wind had risen quite dramatically during the lunch stop. It is quite difficult to assess the wind strength from the beach, despite this Fala and several other boats did reduce sail before setting off, but Arapaoa was caught out and capsized just offshore. Peter Kovesi in Whimbrel did a fine job of standing by and collecting various bits of flotsam as the two Michaels set about the now familiar job of bailing the boat out. Wee Birlinn reduced sail, as did Kailani, and with only a jib and mizzen set, we were sailing downwind at 4-5 knots.

The PBYC foreshore can present a challenge when the sea breeze is strong, however everyone made it back safely. Peter in Whimbrel again showed everyone how things are done by sailing downwind straight onto the pontoon at the boat ramp. The pontoon is completely exposed to the sea breeze with rocks to leeward. It was however great to see everyone lending a hand with each other’s boats as they came alongside the pontoon.

Over the weekend we traditionally award spot prizes to the participants for feats of skill, daring do or similar, the following boats were recognised.

Participating boats were as follows:

Kailani recorded the following statistics for the weekend

Thanks to Peter Kovesi for the following sailing photographs, land based pics James Bennett