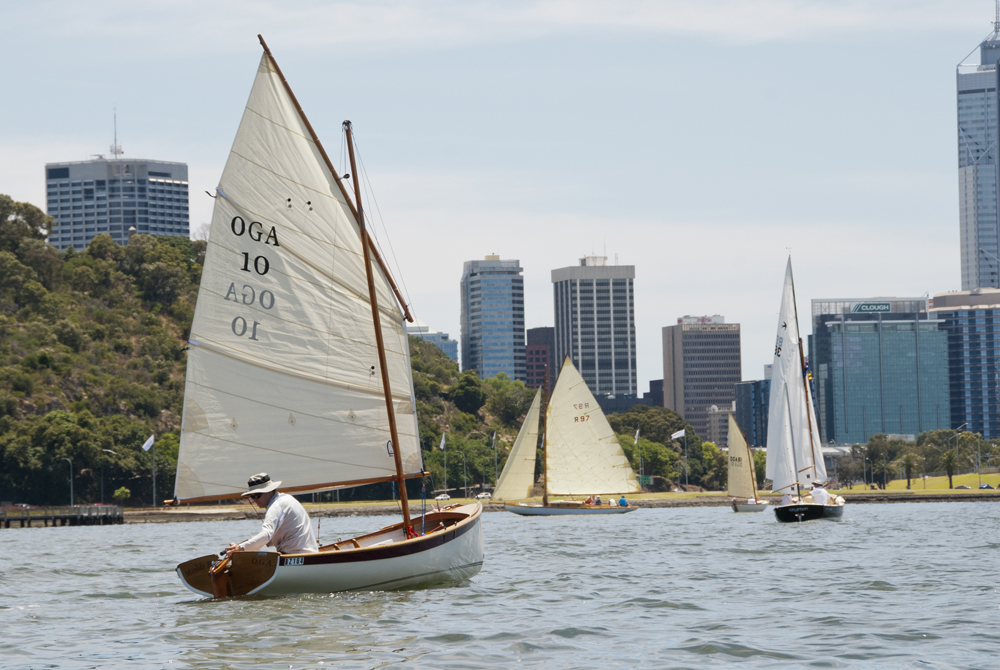 Six boats were smartly lined up on the foreshore in front of the Matilda Bay restaurant at 9am on Saturday morning drawing appreciative looks and comments from passers-by. Taking part were,

After a safety briefing by Jim Black the fleet set off up river initially in a pleasant 10 knot south-easterly breeze escorted by Canobie. Unfortunately the wind faded away to a few puffs by the time the old Swan River brewery drew abeam. Rather earlier than expected the rowing section of the raid commenced with crews manning their paddles or oars. Chris Robinson’s 12ft secret weapons (specially imported from the New Zealand) saw him creep ahead at this stage.

The Narrows Bridge was easily negotiated in the calm conditions and as the fleet drew level with the Barrack Street Jetty a few puffs of breeze allowed the rowers to relax. However it was clear that by the time the Causeway Bridge drew near that a shortened course signal would be made by our fleet captain on board Wee Birlinn. By common consensus it was decided to head across Perth Water towards the beach adjacent to the Wesley College boat ramp. Perth Water is surprisingly shallow in parts and with a gusty southerly wind the fleet tacked south with their centreboards raised. A pleasant picnic was had by all before the sea breeze came in with its usual suddenness. Several boats decided to reef on the beach before we headed back towards the Narrows Bridge.

This was probably wise as the wind on the west side of the Bridge was a solid 18 knots.

If there was a negative to Saturdays sail then it was the surprisingly tricky passage under the Narrows Bridge. With the sea breeze ‘in’ the wind was veering under the bridge so that it was right on the bow. Matthew Flinders was the path finder and with a combination of oars and sails showed everyone else how to make the passenger. For boats with marginal under bridge clearance lowering a sail or mast was required. After a little hesitation the fleet made their way through the central arch and into the full strength of the breeze blowing on the other side. This was not for the faint hearted as the river banks in this part of the river are unforgiving concrete and with a reasonable number of power boats around it was a case of ‘going for it’. Matilda Bay being single handed on Saturday wisely decided to stay in Perth Waters and our valiant Class Captain dropped back to collect the skippers car keys so that a recovery could be arranged when the fleet returned to Matilda Bay. For those who had to drop their main sails there was a tense few minutes of tacking against the sea breeze and incoming tide to get enough sea room before luffing up and hoisting full sail.

Once back in the main part of the river everyone enjoyed a cracking sail in the 18-20 knot sea breeze before heading back to the sheltered waters of Matilda Bay.

Saturday’s first prize went to Paul Ricketts and his son Liam on Matthew Flinders and the Special Effort prize went to John Horley on Matilda Bay. After the prize giving a pleasant social BBQ was held before we all headed home.