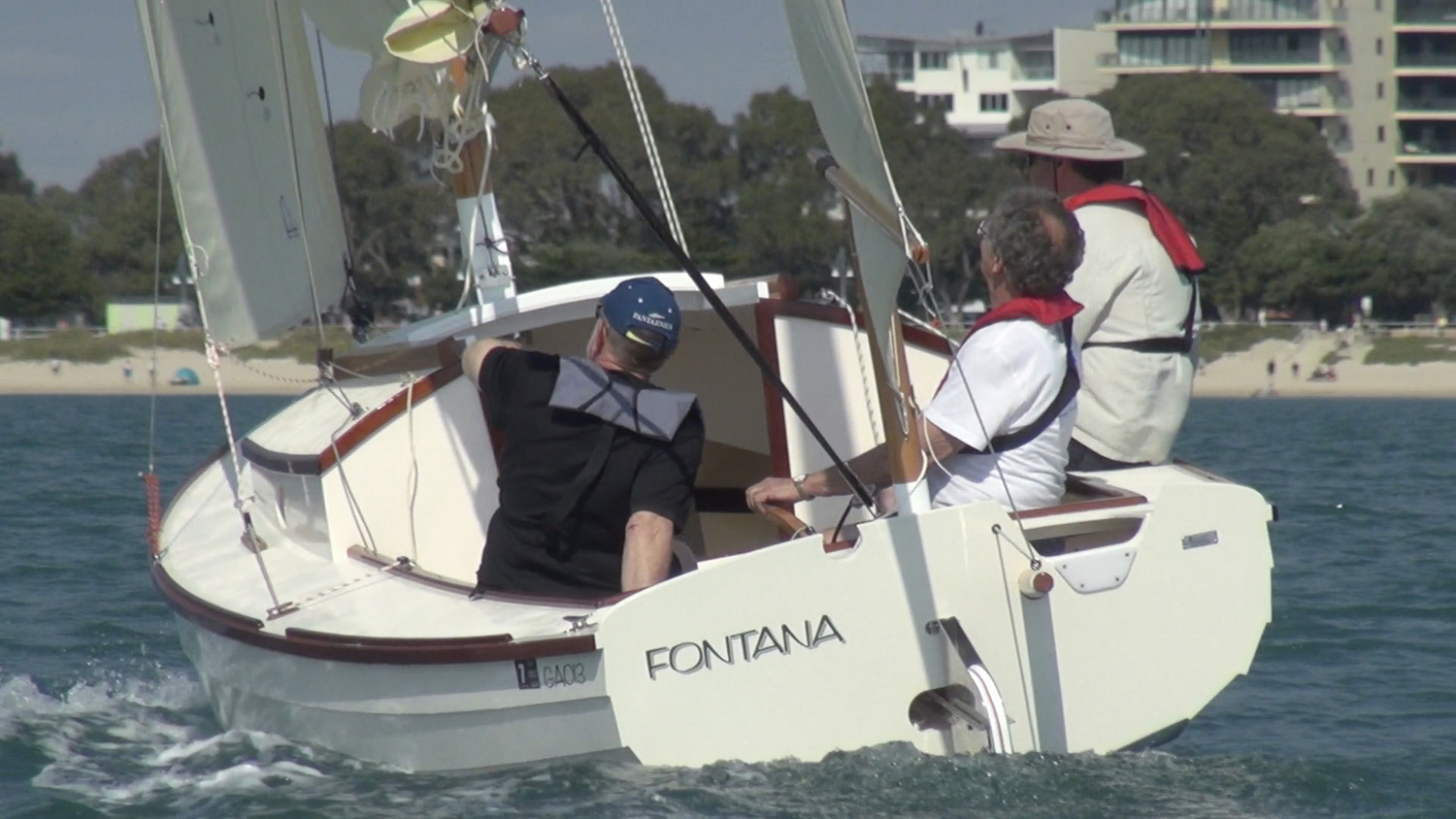 On Sunday 27th September 2015, Tony O’Connor launched Fontana having started building her at his East Rockingham workshop in June 2014 in between his busy schedule of custom boat building, boat repairs and boat modification jobs. Tony’s target was to transport his workmanship to Hobart to exhibit the boat at the Wooden Boat Festival in February 2015, an ambitious schedule.

He did get to Hobart after trailering Fontana across the Nullabor and then Bass Strait in the middle of the Australian summer, quite an achievement.

After Hobart there were still some finishing touches including completion of the installation of the centreboard and rigging detail, all delayed due to pressure on Tony’s time as a boatbuilder, including mine to fabricate a bowsprit for my BR20.

In any event, after a couple of false starts, Fontana made it to the launching ramp at Rockingham on Queen’s Birthday weekend 2015 and after Penny (Tony’s wife) liberally doused Fontana with champagne she gracefully entered the water of Mangles Bay amongst an admiring crowd.

Fontana is a recent 6m Francois Vivier design referred to as Jewell. Her key dimensions are:

The features of the Jewell design include a cuddy cabin with facility for a small galley, large cockpit and provision for either a petrol of electric outboard. Tony advised that building time totalled 800 hours but promised that the next one would take less time.

The Jewell comes as a CNC kit only and was cut on Tony’s CNC machine at O’Connor Wooden Boats using 9mm and 12mm Okoume marine ply.

After the launch and a few adjustments to rigging and sails, Fontana sailed out into Mangles Bay accompanied by Jim Black in Wee Birlinn, Dave Archer in Precious Little and Chris Robinson in Gryphon during which time Paul Ricketts captured Fontana’s sailing performance.

We OGA “C” Fleeters were amazed at the turn of speed Fontana showed whilst Tony took her through her paces, especially as she was sailing with three crew and a full reef in the main. We will have to look out for Fontana during the Retro Series and the OGA Regatta in future.

OGA member Peter Edmonds was on board during Fontana’s first sail and he commented that “ Fontana was a delight to sail aboard, the helm was well balanced, heel was not over pronounced, the cockpit was a comfortable space for three men and the cabin (cuddy) was open and useable.” He said “ Francois Vivier has got the design for a day boat with cuddy just about right”.