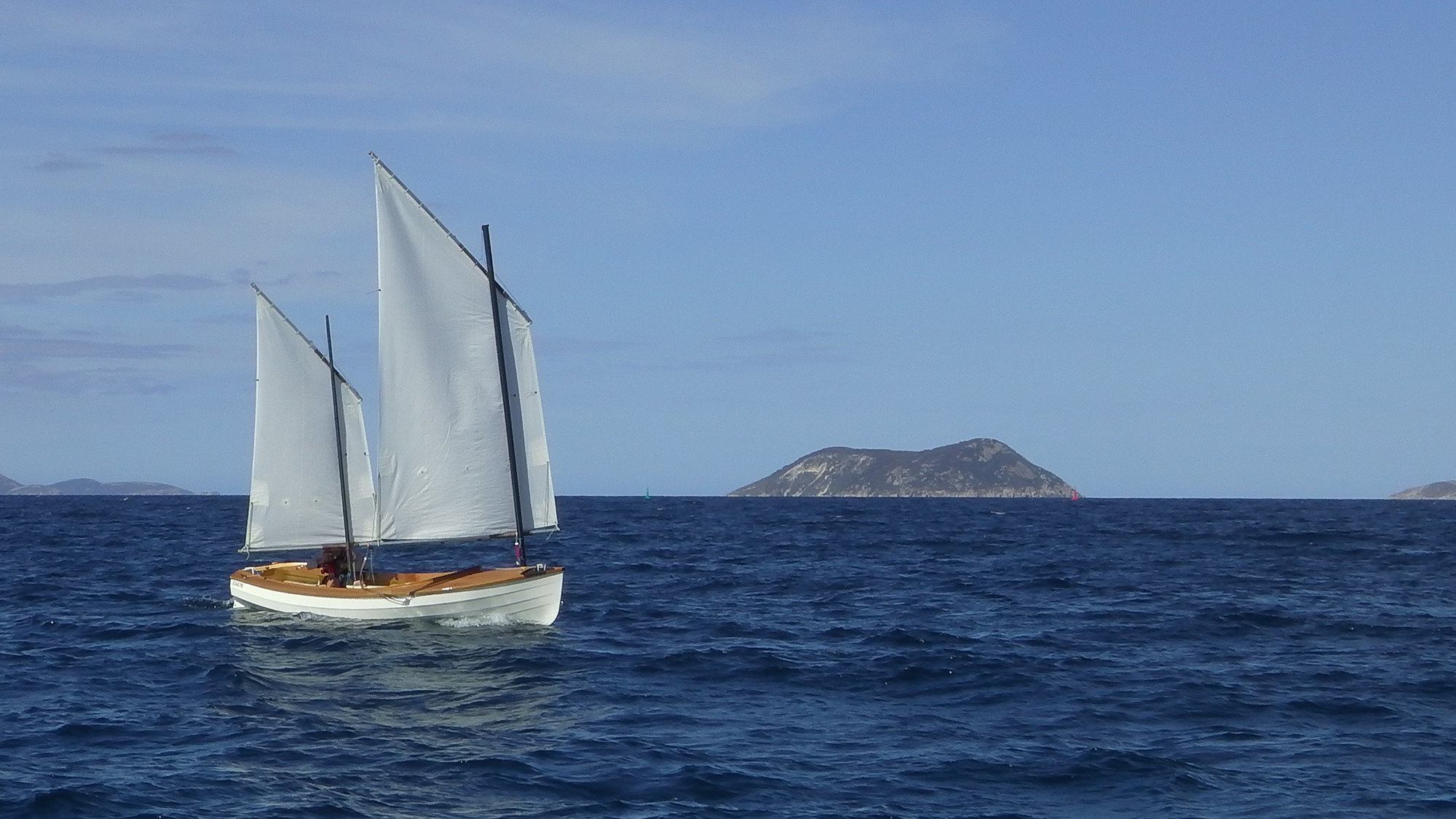 Visiting Albany at Easter this year were: Gryphon with Chris and Jean, Araluen with Paul and Tracy, the nameless Vivier Jewell with Tony and Penny, Whimbrel with myself, and Peter and Helen Edmonds. Our contact at Albany was Lawrence Cuthbert from the Albany Maritime Foundation who looked after us superbly.

We arrived at the Princess Royal Yacht Club on Friday afternoon and soon busied ourselves exchanging notes on where we had been breathalised by the police and trying to decide which roadhouses had the most poisonous coffee. We chose to pitch our tents on the grassed area at the western end of the club car park. Despite being elevated it was surprisingly sheltered from the wind and had the advantage of offering stunning views across the harbour and easy access to the club’s showers. However, as we struggled to hammer in our tent pegs we soon discovered one catch, our camp site was in fact a huge lump of Albany granite with just a smear of dirt on top.

Later that evening Tony and Penny arrived with their much travelled Vivier Jewell. As darkness set in they unpacked their neatly folded tent but found no sign of its fly. Various mutterings about offspring who had been previous users of the tent were heard. With a heavy dew already settling we quickly assembled a tarp, poles, lines and pegs, and improvised an alternate fly.

We awoke on Saturday morning to find our harbour view had gone, replaced by a thick fog that had the photographers amongst us quickly snapping away at the beautiful misty sunrise that greeted us. After a breakfast, which had been supplemented by some excellent pancakes from the Ricketts’ kitchen, we hitched up our boats and headed over to the Albany Boat Shed at the town marina. For the morning our boats were to be on display for the Albany Festival of the Sea. We soon had our boats rigged up but as we were standing around we saw that Tony and Penny were busy with their chamois cloths shining up the already immaculate Vivier Jewell. The rest of us looked at our boats and realized they were decidedly shabby in comparison. Soon we too were busy doing what we could to bring our boats up to scratch. “What am I doing?” I thought to myself, “I am cleaning my boat!”. “What am I doing?” said Jean, “I am cleaning Chris’ boat!!” Finally our boats were clean. However, the same could no longer be said for the OGA T-shirts that Paul and I had made a special effort to wear. As we had laboured over our boats our T-shirts had been quietly doing a good job of cleaning them too.

Soon the crowds were milling around our boats while in the Boat Shed music played and seafood was being served. Lawrence Cuthbert was busy taking the fine whale boat ‘Spirit of Albany’ out and around the marina with plenty of willing hands happy to take up the oars. After an early lunch we launched our boats at the excellent ramp and headed out into the harbour. We had no particular plans but in no time we had slipped out of the harbour and were soon enjoying perfect sailing conditions in King George Sound. Eventually Gryphon and Araluen headed back but I was determined to get to Oyster Harbour for a coffee. Now it is not unknown for me to fall foul of an adverse tide in my search for a coffee. Knowing that this time Chris would not be around to get me out of trouble I carefully ascertaining that the tide was running out of the channel and that once in the harbour I would be able to get out again. Secure in this knowledge I made my way into Emu Point to complete my cappuccino cruise

That evening we were too slow in getting ourselves into a restaurant so instead we enjoyed pizza in the park while being treated to a fine lunar eclipse. Satisfied with a fine day’s sailing we retired to our tents but not before ensuring all our tent ropes were secured, it was clear the weather was changing. A peaceful night followed interrupted only by the sounds of tarps flapping in the wind and the occasional clang of Tony and Penny’s improvised fly poles as they periodically fell to the ground.

The following morning, having endured a night of tarp induced insomnia, Tony and Penny packed up for the drive home. As they lifted their tent to dismantle it a very neatly (too neatly) folded fly revealed itself from underneath…

As Tony and Penny drove off we were determined to stay a little longer and do some more sailing. The sky was grey and the wind forecast to increase but it was acceptable. We launched Gryphon and Whimbrel at the yacht club with the aim of doing a sail across the harbour. Paul decided that the memory card on his camera was nowhere near ful enough and joined Chris on Gryphon for filming duties. After picking our way around the eastern end of the harbour exploring the quarantine station and the wreck of the Cheynes II we headed over to the marina to join the others for coffee. Sadly it eventually became too windy and cold to sit around any longer having coffees and so we set off again. Gryphon headed back to the yacht club loaded up with Lawrence and two guests on board.

Paul joined me on Whimbrel and, feeling that we could not head back just yet, decided to test out the Sound once more. Rather than try to describe this little escapade here I refer you to Paul’s video ‘Navigator Nutters’ all I can add is that the hot shower back at the yacht club was great.

We’ll be back next year for sure. The hospitality is wonderful, there are some great sailing destinations to explore, and the coffee is good.