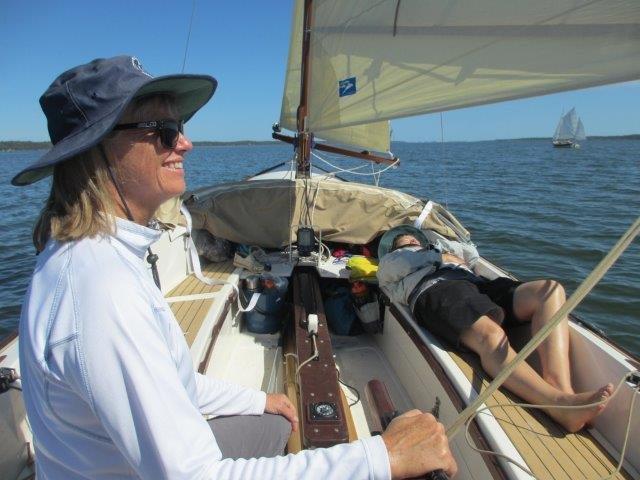 Six boats their owners and crew met at Port Bouvard Yacht Club on Saturday 29 November for a 10am departure, with the plan to sail down the inlet to Herron Point camp site. This was a similar format to last year’s outing

The forecast for the weekend had changed throughout the week with the suggestion that Saturdays winds might be up to 17 knots and Sundays wind slightly stronger. Thunder storms earlier in the week and trough type weather conditions did not assist in making the situation clear. On our arrival the wind was southerly at about 10knots but after the briefing given by Jim Black the wind picked up and many of us decided to reef. For Gryphon, Wee Birlinn and Paul Ricketts (in his new boat Araluen) who were sailing single handed this was a wise move.

By the time the last boat had left the beach the wind was already around 14-16 knots from the south west. Precious Little helmed by Dave and crewed by Ross were already a distant dot on the horizon and obviously relishing the wind.

Rachel Kerr on only her third sail in her new boat Ripple was given a loose escort. It had been decided that the lunch stop would be at the small public boat ramp at Bouvard. The approach to Bouvard was quite tricky with the wind gusting off the tree line and with the very shallow rocky reef to the south and boat channel to negotiate everyone did well to get in with no real harm, apart from the odd centreboard bounce.

Our small fleet of boats drew several admiring comments; Kailani’s carefully scandalised main sail was not planned as the main halyard managed to get itself trapped in the centre board casing on the approach to the beach. Rachel decided to reef Ripple as the water on the inlet was now noticeably white capping. With two thirds of the sail still ahead everyone rechecked their sails and tightened critical ropes. Refreshed with lunch the fleet of six boats set off again and once we were back in deeper water it was clear that the wind had increased significantly and was now over 20 knots from the west south west. The single handed sailors were doing well to cope with the conditions which in the gusts were challenging.

Kailani was handling the conditions well, though it was very wet, we were making around 4.5-5 knots to the south with my sister Sarah on the helm, however after a very strong gust I decided to open up the ballast tank. With the ballast tank full Kailani felt rock solid and Sarah said that the boat felt like the small keel boat on which she sails in the UK. On Ripple the jib had been furled making the boat easier to sail and a lot less wet. Jim on Wee Birlinn was obliged to ‘heave to’ a couple of times to pump the bilges. On Precious Little (again scooting ahead) Dave and Ross reported that the cabin windows were at times under water, and certainly from far astern the angle of her gaff was at times horizontal with the horizon. Dave later complained that the only water in his bilges came from Ross’s water bottle which leaked. Paul Ricketts on Araluan looked to be very comfortable, not even bothering with a spray jacket.

Herron Point camp site appeared very quickly, and as recommended most boats sailed a bit further south before turning back to run into the shallows off the camp sites beach. By 4pm everyone had arrived. A very pleasant surprise was the welcoming figure of Wally Cook standing on the beach, his own boat Karina was unable to join the sail as her trailer bearings were being serviced. Wally enthusiastically helped unload some of the boats and later joined us for supper. Being low tide the boats grounded around 100m out from the beach which made the carrying of camping gear ashore a bit laborious. Ross from Precious Little was attacked by a crab on one of his trips ashore and received a sharp nip for his efforts. Setting up the tents was challenging due to the strong wind. However after 30 minutes everyone had a tent up, tea was brewed, wine opened and a circle of seats was set up for serious conversation to commence.

In the late afternoon standing on the beach we estimated that the wind was 18-25 knots with occasional stronger gusts. PBYC however on Sunday, advised us that two of their Flying Fifteen’s had capsized and the start boat had recorded a gust of 32 knots.

Garden Island’s wind record is shown above, as Mandurah’s sea breeze site is not well placed to record winds from the south west.

After a chat and an excellent cheese board to accompany the reviving beverages, it was interesting to watch the various cuisines and cooking methods. Chris had a steam age petrol driven brass and copper stove the size of a small brick on which he heated water for ‘instant in a bag’ curry. Paul produced a large gas cylinder and a waffle iron and proceeded to burn bread wrapped around various fillers including a lethal looking hot bush sauce. The results he claimed were called jaffles. The rest of us had cheap single canister cookers. On these the cuisine varied between more instant packet food, heated up contents of various tins (Precious Little) to a rather tasty vegie curry (Kailani).

James’s sister Sarah (visiting from the UK) gently teased Paul on his ‘bijou’ camping arrangements, which consisted of a partially collapsed swag surrounded by bags, boxes, camera gear and more loaves of bread.

After a pleasant evening of gossip, feeding the local parrots and some star gazing, the wind started dropping out noticeably and a quiet night’s sleep looked possible. However in the small hours we were all woken by the revving of a very loud V8 car engine, with the driver drag racing up and down the gravel road leading to the camp site. After several minutes of raw noise there was an ominous and abrupt cessation. The engine was restarted and frantic revving followed before the engine cut out and silence once more descended over the night. Chris was woken at 4am by a fox raiding the remnants of the previous evening’s food, while the dining area did looked trashed it was clear that Chris’s meal in a bag left overs had been ignored by the discerning visitor.

Sunday morning was a beauty with calm and clear conditions. After tidying up the dining area, a short walk down the camp sites approach road revealed a Ford Falcon GT well buried in the sand and bush with its driver fast asleep face down across the front seats. After checking that he was breathing and that there were no obvious signs of trauma we quietly retreated.

Back at the camp breakfast was in full swing, Paul was still burning bread, Chris appeared to be eating yet more ‘in a bag’ curry and Jim shamed us all by cooking bacon and eggs. The boats were reloaded with our gear. Ross walking out to Precious Little again annoyed the local crab population (very likely the same one as the night before, making sure he had got the message).

We left the beach in a very light easterly which became a very light north westerly wind. It was marginal whether the gasoline topsail should be fired up, but this idea was firmly vetoed by the crew. On Kailani we were three up and the crew took turns cat napping, no doubt a result of having way too much fun the day and night before. After a while the wind increased and the crew woke up and started to take interest.

Rachel had her Brother John crewing for her, and Ripple made good on her name and was moving through the water nicely. The wind increased to a very social 10 knots from the north-west. The crab fishers of the inlet had laid a carefully planned barrier of crab pots across our track, with each float attached to enough rope to rig a small sailing boat. Those of us near Wee Birlinn were startled to see Jim suddenly leap to his feet and give his best impression of the Highland fling, as one of these ropes fouled his centreboard and then his rudder. After 30 seconds of energetic leaping around he managed to sail clear. We reached the Bouvard boat ramp at about 10.15am for a mid-morning cup of tea and a snack. On Kailani this consisted of secret but now revealed hoard of croissants and fresh green tea.

t was decided to have a lunch stop near the boat ramp at Dawesville and use The Leprechaun General Store as a pit stop for fresh coffee and other tasty treats. The wind up to Dawesville was a pleasant 10-14 knots and a very enjoyable sail. After the solitude of the previous 24 hours, the Bouvard water front was like being back in the city with lots of people in the park enjoying the BBQ facilities.

Revitalised we set off for the short sail to PBYC. On this last leg the wind again increased in strength to around 15-17 knots and was so much fun that on Kailani we delayed our arrival at PBYC to enjoy a few broad reaches up and down the inlet.

At the club, Chris Robinson despite having the most spec’ed up Land Rover west of Adelaide was having difficulties recovering Gryphon off the beach and was completely bogged, so it was clear that the rest of us would have to use the boat ramp to recover our boats. This can be quite tricky as the south westerly wind blows the boat away from the ramp pontoon and with rocks immediately downwind, care is required. Those with boats that are easy to row managed this quite well and with the assistance of helpers on the pontoon were able to quickly recover their boats. We are not sure what happened on Ripple, however we do know that brother John took an involuntary swim between the pontoon and the boat. Whose fault it was will no doubt be debated for some years to come.

It was noticeable that the BOM site Marine Weather site was more accurate than Seabreeze in forecasting the wind for this weekend.

All in all a great weekend was enjoyed by everyone, with no serious damage to boats or too much to dignity. Saturday’s conditions were challenging to everyone and Rachel was awarded a nice bottle of red for her perseverance.

Those taking part were: