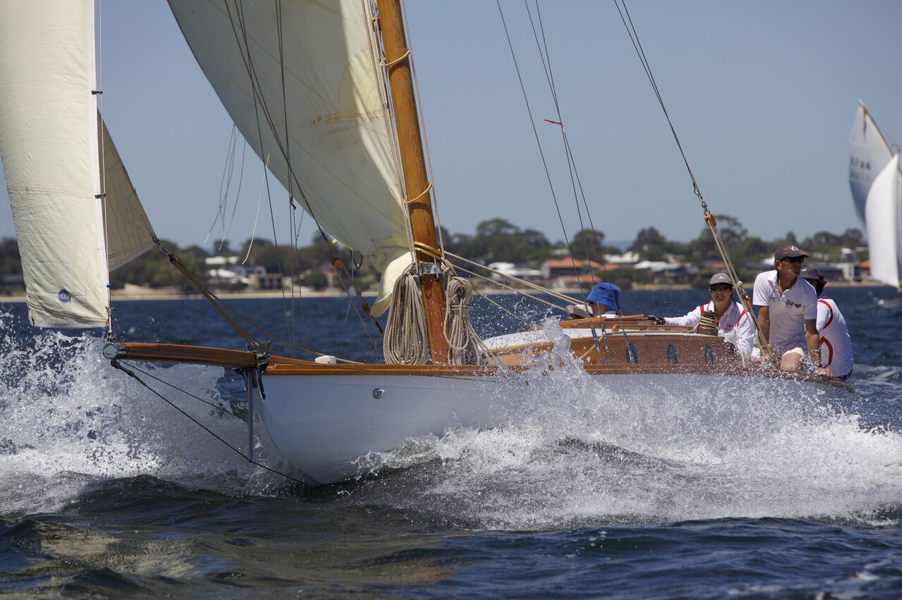 The gaff-rigged sloop Canobie was first launched in Hobart on 1 November 1912. An article was published in The Mercury on that day, to celebrate the event.

Her original design came from the American stable of William Hand Jr, USA, published in the “Rudder” in February 1900. The design was modified by Alf Blore in 1906 to suit the Derwent conditions, and adopted by the Royal Yacht Club of Tasmania.

There were 6 such boats built in Tasmania between 1910 and 1912. Canobie was the last of the 6, built by Chas Lucas at Battery Point. A seventh boat, Gannet, was also built for a Melbourne client, but to a slightly modified design.

At that time there was a push to develop a One Design class of racing yacht, having 21 feet waterline length. The Hobart boats never received a formal class name, as World War 1 intervened, and then other designs arose in Sydney which rendered the boats uncompetitive. To this day these boats are still referred to simply as the Tasmanian One Design boats.

An excellent history of the Tasmanian yachts is contained in the book “Sailing On”, which chronicles 100 years of sailing from 1880 to 1980.

All 7 of the One Design boats are still in existence, scattered across Qld, NSW, Vic, Tas and WA. Five of the boats are still on the water, albeit some have been modified. Canobie is the most authentic to original design.

Being an American design the One Design boats are beamy, compared to the William Fife designs from the UK in that era. Canobie is 32’8” LOA; 9’1½” beam, 21’ on the waterline; and draws 4’8”.

Canobie was raced competitively in Hobart by her 6 previous owners. Her rig was changed from Gaff to Bermudan rig in the 1920’s, and then back to Gaff in 2006.

Owen Stacy brought her to Perth in 2009, after Canobie’s previous owner Bruce Anderson, and his colleague Graham Cook from the Maritime Museum of Tasmania, searched for a new owner who was prepared to restore the boat to her former beauty and help preserve the history of this sailing class.

Canobie was fully restored to her original configuration in Mike Foster’s South Fremantle workshop in 2009/2010. Mike was able to source many of the specialty timbers for the work, including celery top pine, Victorian ash, silky oak, myrtle and Tasmanian oak.

The Maritime Museum of Tasmania was particularly helpful in providing historic photos, drawings and a boat building manual from that period of Canobie’s beginnings.

The aft coaming was developed from the original drawings, and steamed and laminated to shape. The coach-house sides had a 7mm laminate of huon pine added to the original timber.

The hull and deck timbers were in relatively sound shape, considering the boat’s age, but a number of the spotted gum ribs needed sister-ribs. The hull was completely re-corked prior to re-launch.

A major stiffening of the keel and keelson was needed after the new rig tension caused the hull planks to open up during the 2010 racing season.

The diesel motor, which was added in 1991, was removed and replaced with a 7kW electric motor and battery bank.

Jan Jensen made the forged and galvanised fittings for the spars and blocks locally (Kwinana, WA), with designs by Igor Bjorksten which correlated very closely to the 1897 Dixon Kemp manual for Yacht Architecture, a copy of which was kindly provided by the Maritime Museum of Tasmania.

With the help of a number of other superb WA craftsmen Canobie was re-launched in May 2010.

Canobie is now listed on the Australian Register of Heritage Vessels, No. HV00036, managed by the Australian National Maritime Museum. She is retained at Royal Perth Yacht Club, and is in good company alongside other “old girls” Thera (1911) and Mercedes (1913).

Canobie is raced in the Swan River Retro Yacht Series of races, held once a month on Sundays, and in other Old Gaffers Association of WA Inc races on the Swan.

For more history on Canobie and the Tasmanian One Design boats, Google: “Canobie One Design”.