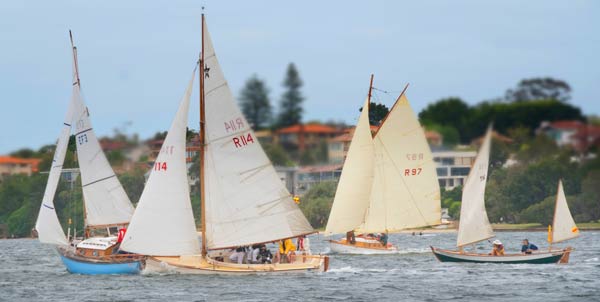 Retro Series Race1
Sunday 14 October at 10:00 precisely the starting gun fired over Melville Water for the first of the 2012/2013 Swan River Retro Yacht Series races run by Royal Perth Yacht Club. For the C Fleet entries this was the culmination of a couple of weeks fairly intensive emailing to notify everyone, establish our eligibility and have our entries registered. Three C Fleet boats entered and two made it to the start line, Kailani (Bay Raider 20, crew: James & Belina Bennett) and Wee Birlinn (Ness Yawl, crew Jim Black & Kim Klaka).

The forecast was 10 to 15 knots westerly, gusting to 20 so the most likely course was Course 3 starting near “Dome” and so it proved.

One of the great advantages of the C Fleet boats is the ability to launch almost anywhere and so on the damp blustery morning we decided to save ourselves a very long beat to the start and instead of launching at the Matilda Bay ramp we put our boats in at the old ramp on the west side of Pelican Point. It is not the best of ramps but can be used with care, and certainly saved us much time and effort before the race.

All up it was not a large fleet that gathered at the start line, only seven starters in total, but an interestingly mixed fleet, from the huge Bacchante right down to my Wee Birlinn. The wind increased in strength just before the start which made the pre-start manoeuvres interesting but somehow we managed to get Wee Birlinn on starboard tack at the starboard end of the line just a few seconds after the gun. I was just congratulating myself on one of my better starts when I heard a hissing noise behind me and the huge Bacchante came thundering through to windward between us and the committee boat; for a moment I thought she was going to sail right over us but she squeezed through and quickly left us bobbing around in her wake. The joys of mixed handicap racing!

After that exciting start we all settled in to the beat up to Parker, with most boats electing to favour the left hand side of the course. Having the smallest boat in the fleet we thought there was little point in just following the rest so we opted for the northern shore; in hindsight probably not a good move as we were a long way behind when we finally rounded the windward mark and set sail for a couple of very pleasant reaches all the way back to the RPYC finishing line. We made up some ground on the reaches but all I can say is that “it took the entire fleet to beat us”!

We recovered our boats at the excellent Matilda Bay ramp and then joined the rest of the fleet for a BYO lunch and get together on the RPYC lawn, culminating in the results announcement and prize giving. It was good to catch up with the skippers and crews of the other boats for yarn in very pleasant surroundings on what turned in to a very pleasant day. I, for one, thoroughly enjoyed the whole day and am looking forward to improving my position in the next race. Thank you RPYC and OGA!

I think those of us that were there all agreed that these races are actually quite suitable for our types of boats, that we can complete them within the given time limits and have good fun while doing so. I look forward to seeing more of you on the next start line:

Be sure to view the pictures on the Galleries page.