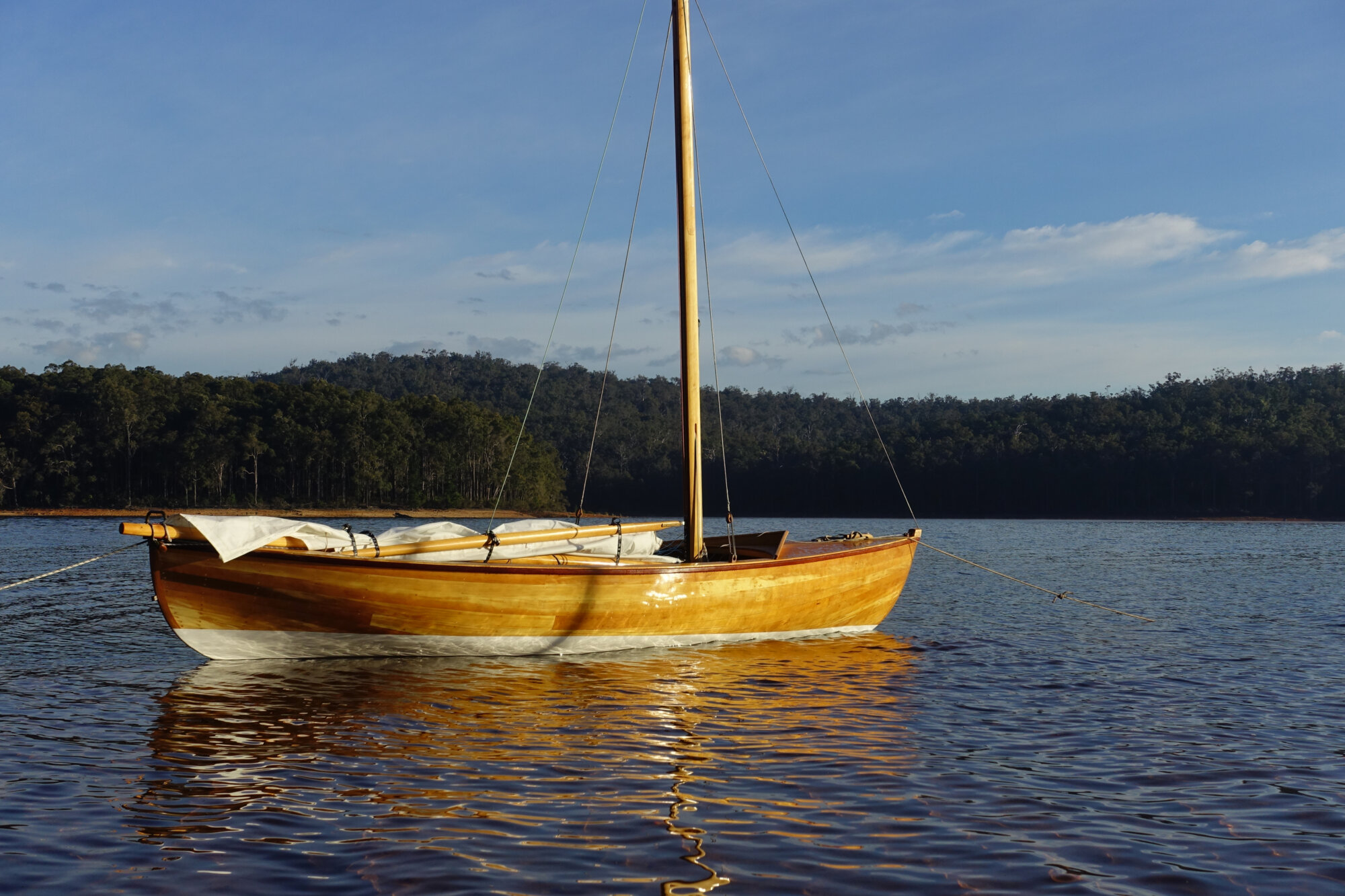 For some of us, this was the third visit to Wellington Dam in just over 12 months. Last year the dam level was around 94%, this year the level was around 82%. In reality this meant the water level in the dam was around 2m lower, however there was still plenty of water for us to sail in. Peter Kovesi correctly pointed out this meant that there would more beaches accessible for lunch stops, which was not the case last year.

The majority of participants arrived on Friday afternoon and set up camp at the lovely Potters Gorge campsite. Fala’s crew had come early and had enjoyed riding on some of the excellent mountain bike trails before joining us at camp. Last year we favoured the Dowan Loop, however this year some had figured out that the Gilgie loop camping area was closer to where we normally leave our boats moored.

Almost everyone had also brought along fire wood so we were able to enjoy great camp fires on each night, an essential part of the weekend’s fun.

Sadly, the weather gods were not looking upon our weekend with much love, on Friday it was actually raining as we drove up the escarpment from Bunbury, however this cleared away as we approached the camp ground. Despite the rain the wind was very light. The Longley camp site was the centre of entertainment on Friday evening. This well-chosen site was also right next to the beach where we beach moor our boats. Good banter and stories were shared before we declared bed time, with the hope for favourable sailing conditions the next day.

Saturday arrived with no rain and very light winds, there was just enough though to get those looking for a coffee fix to sail to the (this year, larger) beach below the café’. Those not needing coffee were gently gliding around the pristine waters near the dam wall. Once everyone was ready, we set off up the arm of water that leads to Collie, however the wind was sadly very light and slow progress was made. By lunch time we had sailed perhaps 3km, so the leaders selected a nice looking beach in a cove featuring an extremely tall dead tree emerging from the water. Most boats were obliged to row the last few metres, such was the lack of wind. For Kailani it was time to demonstrate the joy of having an electric outboard. The Spirit e-propulsion has the motor in the hub, being under water it is almost silent. This might be considered cheating by some; however, a Bay Raider is not the easiest boat to row!

After lunch it was a very slow sail back to camp, such was the wind that two boats only 100m apart were seen sailing in the same direction close hauled but on opposite tacks! The wind came and went it teased, taunted us with endless possibilities before dropping out completely. Crazy Birds crew resorted to rowing back to camp Venetian  style, sitting facing forward. The fastest craft on the water was Paul Day in his kayak, he was able to paddle around and talk to everyone as they drifted waiting for the wind gods to give them a small puff. On Kailani we took the opportunity to test the new outboards performance, noting the boat speed on different power settings. I was too engrossed in this sea trial to realise that we should also have offered to tow a boat or two and check that performance as well! Apologies to one and all!

Saturday nights socialising was at the Bennett camp site, we had a good fire going before everyone showed up. There’s nothing quite like a roaring camp fire, good nibbles, warming drinks and swapping stories. There is something in the human psyche that triggers great pleasure sitting around a real fire. Sadly, the outlook for Sunday was again not the best with light winds and a chance of rain mentioned in the forecast. On Sunday morning, there was some wind at 6.35am for around 20 minutes before a glassy calm descended. The updated weather forecast on Sunday morning mentioned that it was going to rain later in the day with even more coming in on Monday. In fact, the forecast read more like a washed out camping holiday in the UK. Some of our attendees decided that it was better to get ahead of the weather and pack dry tents than take a chance with such an ominous forecast. However, some were already messing around in their boats enjoying the perfect rowing conditions! Wayne Wright had driven down from Mandurah for the day and he was busy rigging up Warragul and determined to enjoy whatever Wellington Dam had to offer. On the water an impromptu rowing race developed between Whimbrel and Arapaoa with the finish line being the beach below the café. This was great fun and should become part of the weekend if we go again next year. The café was already quite busy with mountain bikers and hikers. It was a very relaxed and chilled group of sailors that sat waiting for coffees and food, chatting and watching the tree tops for any sign of wind.

The row back to camp developed into a photoshoot. Our boats reflections in the calm dark water of the dam were a photographer’s dream. In fact, Peter Kovesi was heard complaining when someone’s boat caught a puff of wind and their bow wave caused a ripple spoiling the mirror perfect reflections!

Sadly, it was obvious that with the poor forecast and no evidence that there would be any wind most boaters decided to pack up and leave.

Chris Bowman on his beautiful Rocking Chair set off for the beach ramp in no wind, and realised too late that he had no oars and had to be rescued by Crazy Bird’s who towed him by oar power the 300 metres back to the ramp. That will be a costly salvage!

For Kailani’s crew we decided to stay and take a chance with the wind and rain. Later in the afternoon we e-motored in glorious silence around Snake Island, again checking on the new engine’s performance, before recovering the boat back onto the trailer in the late afternoon.

On Sunday evening a much smaller group gathered around another good fire, Michael Arthur had also stayed on, his parents-in-law who were camping near us also joined us. Towards the end of the evening a very light drizzle started, certainly not enough to dampen our fun.

Monday morning was damp but there were clear skies and the tent almost dried off in the light wind, however dark clouds were evident to the north west, so we quickly broke camp and packed everything away before a light misting of rain descended.

On the drive back to Perth, fortunately not on the freeway one of Kailani’s tyres delaminated. A quick change of tyres and we were back on the road. Later in the day we heard from John Longley that they had a similar experience, fortunately with no damage to Crazy Bird. The guys at the trye shop told me that trailer tyres should be replaced at least every 8-10 years as the rubber compounds harden and de-nature. If the tyre is exposed to the sun this can really accelerate the process. So, its well worth covering the tyre with a canvas cover if the tyre is exposed to the sun where your boat is stored.

Thank you to everyone who came along this year!